I am a 51 year old working mum of five – not all at home thank goodness. Im a member of the Women for Independence National Executive. This Blog is growing and changing as my hopes and aspirations change. I actually DO expect to change the world but I accept that might not even make sense sometimes. I hope you enjoy the read.

Scotland’s not for Leaving

Well yesterday we had the unedifying spectacle of parties across the UK squabbling over the EU election results.

Was it a remain vote? Or was it a leave endorsement? Back and forward it goes.

We saw Corbyn grudgingly suggest that a people’s vote might be a good thing after all but suggestions from the party that they’ll wait til their conference to decide their position made me want to shake them. For All eyes are on the prize of no deal 31st October exit for the Tories and Farage. More dithering from Corbyn is not going to help change that.

Labour are also sticking to their “Let’s have a General Election” position. Despite the chances of that receding massively surely.

The Tories will not want to go to the ballot box until they a) have a new (popular) leader and b) have delivered a no deal Brexit.

And Meanwhile in Scotland, the Western Isles turned yellow too.

Some information worth noting in the photos attached from Dan Paris. Despite various Tory politicians trying to spin this as a loss for the SNP it is clearly a remarkable result.

In today’s telegraph the Tories complain that Nicola Sturgeon is deceitful in taking the EU vote as an indicator that Scotland is nearer to considering independence.

Several things. Firstly the Tories themselves made this election about independence “ Vote for the Tories and send a message to Nicola Sturgeon – no more referendums”. That went down well!

Scotland has voted for remain THREE times now. Once in the EU ref, once in the General Elections when we returned a majority (by a mile) of remain MPs and last week when every single council area returned remain victories.

And finally, no one – absolutely no one voting SNP last week could fail to realise that their vote was about remain and about a second Indy referendum.

Even the Brexiteers and the Tory party can’t spin this result. Scotland wants to remain in the EU. Overwhelmingly. It seems that the Tories think that’s not for us to decide. Labour have no clue. So here’s a helping hand for them – 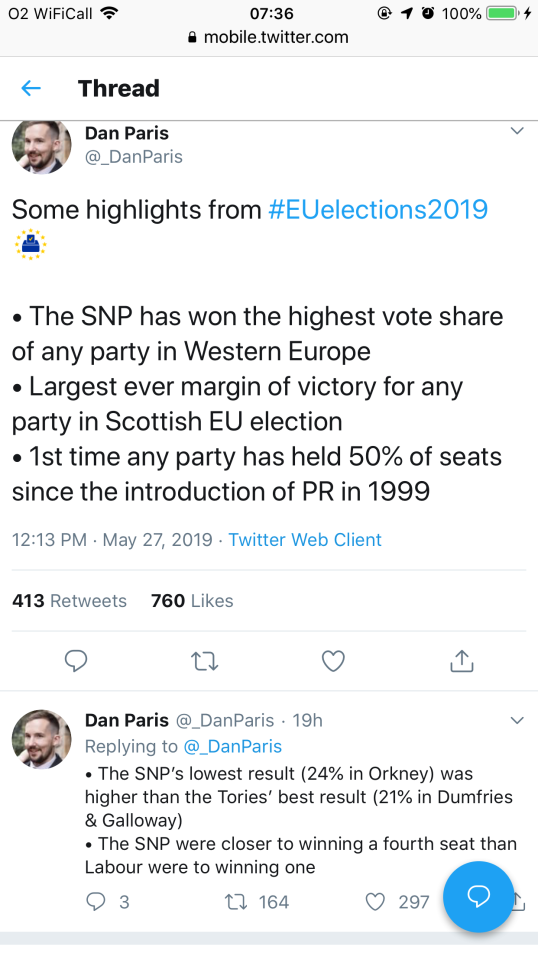 If ….IF they have a backbone in Scotland, IF they want to have any chance of survival, they must unequivocally stand up for REMAINING in the EU. They must also, support all and any mechanism for that to happen – including a referendum on Independence with a free vote for their members and politicians.

That’s the only thing they can do that might give them a chance.

Come on Labour – get a grip!

One thought on “Scotland’s not for Leaving”